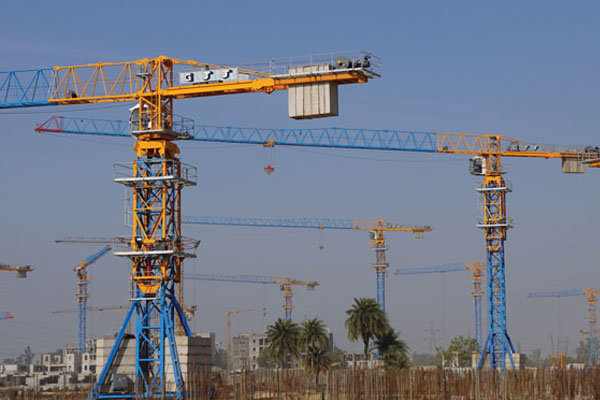 The tower crane first came into existence back in the early 1900s. Many cities all across the world found tower cranes to be advantageous because they allowed construction companies to put up buildings without taking up too much space. But the one problem with tower cranes was that they needed to be bolted into the ground and secured so that they wouldn’t tip over. Over time it has gone through an evolution.

Modern tower cranes are being used for lifting heavy building materials, machinery equipment, and other objects at construction and infrastructure projects. They are usually located beside/on buildings with exact positioning to handle heavy loads. It has a long working range, big load capacity, flexible height and working range, etc. With these advantages, using a tower crane can reduce labour intensity, increase efficiency and shorten construction time. Tower cranes are widely utilised in the construction industry owing to the high demand for material handling on elevated levels. However, they also find applications in construction of structures such as dams, bridges, industries, power generation plants, and others.

Depending on construction and infrastructural projects, the design of cranes has evolved over the past few years. Here are a few trends in the current tower crane market.

It is used for the accurate handling of a wide variety of heavy materials. The way they can be adapted to work well for any job site and any type or volume of material being transported is what makes a hammerhead tower crane such a versatile workhorse. A hammerhead crane also allows you to “rack” the crane. This is moving the trolley in and out along the job with its load suspended but not altering the level of the load.

These are especially demanded for congested sites. They have a very short counter jib and a variable working radius, which permit high productivity in extremely narrow spaces. It’s common to have limited space and clearance when working with a tower crane in an urban metro area and downtown work sites. It is also ideal for building projects where there’s not much space on either side of the site and you need to work safely. A luffing crane can raise or lower its jib, and that allows it to reduce the slewing radius. This kind of crane is frequently the best solution when several cranes are working on the same site, avoiding any kind of crash with other cranes or the surrounding buildings. With their variable working radius, they don’t interfere in the working area of the other cranes on-site and they can be parked with a very reduced radius.

It is compact, easy to erect and operate, and has several transport options. Wireless remote controls, quiet and efficient electric motors, state-of-the-art variable frequency motor drives, and overload protection systems are standard. It includes a horizontal jib and mast-mounted to ballast and can fold and unfold for dismantling and erection on site. They provide good reach and lifting capacity while having a small footprint, making them suited to operating within tight spaces. It is normally operated using a crane remote control, though in some cases an operator cab may be fitted to the tower section. A self-erecting tower crane can also be tracked while it is still erected across a level construction site by using its on-board generator.

The latest models come with a compact head-mounted by an auto crane in a single lift. All drive pedestals and rails are designed to last. All drives are easy and safe to reach for maintenance work straight from the compact head. The newly designed comfort cab is attached and removed using quick-release fastenings and is identical for all small and medium-sized cranes. This cuts crane fleet costs. Flat top cranes, due to the design, have practically no alternative stresses in the jib or counter-jib structure. Regardless of where the trolley and load are situated, the upper part of the jib is always working in tension and the lower part of the jib is always working in compression. The flat-top tower cranes don’t need to be erected as high as tower cranes with pendant lines and top masts because the interferences between jibs are less, this can equate to a large cost saving throughout the project work.

It is a structural type tower crane, with an A-shaped tower cap connected to the boom and balance jib through a pull rod. A top kit has a cab at the top of the mast which puts the operator even with the trolley and above the work zone. The inverter, contactor, circuit breaker and other main electrical components are attached to the crane for increased reliability and durability.

The latest models can handle high load capacities and have an unmistakable silhouette. The various size classes prove their worth for medium and large construction projects. These cranes are suitable for sites that are high up, crowded or widely spread. These tower cranes have stationary features and rest on structural & steel bases, providing stability in weightlifting operations. Types of Road Rollers in India