The load-bearing capacity deteriorates in the jetties due to higher than anticipated live loads, changes to the structural condition, corrosion or defects in the original design of construction. This can lead to insufficient longitudinal or transverse bearing capacity of the jetty which leads to cracks. In such scenarios appropriate retrofitting method and material is a prerequisite to regaining its structural strength. One such case study is being discussed wherein the CFRP reinforcement method was used to restore the structural strength of the jetty.

The project in focus is Reliance Jamnagar Jetty located on the western coast of India in the state of Gujarat in the Saurashtra region. The jetty was retrofitted using Carbon fiber and composites- RELinforce™ solutions including underwater curing Epoxy solution for water submerged portions. It was applied to existing composite materials for reinforcement and corrosion resistance. RELinforce™ comes with properties such as high tensile strength, high stiffness, high strength to weight ratio, high chemical resistance, temperature tolerance to excessive heat and low thermal expansion. It is applied in the form of a flexible fabric during installation, then saturated with a resin matrix, allowing it to harden to transform to a strong, unyielding material with a strength-to-weight ratio.

We have focused on the site requirement, retrofitting method and material used in the project. This contains a brief detailing of the measures undertaken in 2019 and 2020 project site visit was done to prepare a report on monitor whether to meet structural strengthening criterion was met.

Site Requirements: Reliance Jamnagar Jetty piles were under continuous immersion in seawater which was affecting the load-bearing capacity of the bridge. Due to such a harsh environment, the strength of the piles was deteriorating day by day. To address this problem and keep the jetty and Jamnagar port working we retrofitted the jetty piles using the Carbon Fiber strengthening solution.

Timeline for Completion of Work: 3-5 Months (Including Surface Preparation to Final Wrapping process)

In 2020 a detailed site background & CFRP application performance checking was done to observe the performance of the jetty after Carbon Fiber Strengthening. Here are the observations;

Final Assumption- All the criteria of structural strengthening were met for Reliance Jamnagar Jetty.

Relinforce™ product range is used for structural strengthening & protection of the structural members using guidelines that conform to international standards. These products just don’t repair degraded structures, but it makes the structures stronger even against harmful effects of seismic forces or further corrosion. There is a wide range of products combined with outstanding combinations of properties, such as low weight, immunity to corrosion, excellent mechanical strength and stiffness to tackle the issues on hand with ease. To know more about the product, visit- https://www.reliancecomposites.com/ 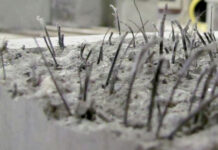 The use of concrete fiber for construction