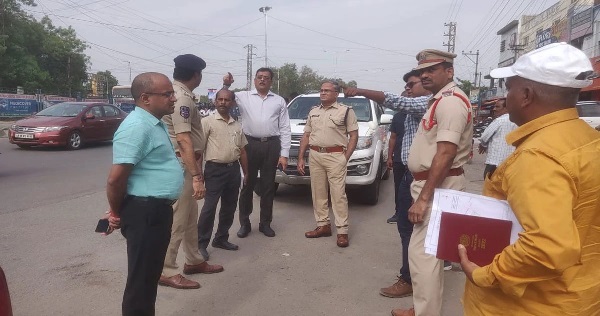 In a major move to ease the traffic congestion on NH-65 from Madeenaguda in Hyderabad to Pothireddypally junction in Sangareddy district where the city is fast expanding, the National Highways Authority of India (NHAI) has decided to build two six-lane roads to serve the highway traffic and local traffic.

The road would witness over one lakh passenger carriage vehicles flow in a day in addition to the two-wheelers on the existing road. The traffic is expected to go up in the coming years.

The NHAI had already given the contract of surveying the road work for the 31-KM stretch to Jindal Consultancy which is on the job to prepare a detailed project report within six months. Speaking to Telangana Today, Executive Engineer NHAI Pailla Dharma Reddy has said that there would be a six-lane highway from Madeenaguda to Pothireddypally. The vehicles which will travel to Zaheerabad and Mumbai will have to take this road since there would be no chance to get down until the 31-KM road ends near Sangareddy.

Meanwhile, another six-lane carriageway will be built for the local traffic along the highway. Since the city was fast spreading towards Sangareddy town during the past few years, the NHAI officer said that traffic congestion was witnessed at many places such as in Lingampally, Patancheru, Isnapur, Sangarddy and a few other places. As the NHAI was not having sufficient land at Rudraram, Kandi and other places along the current NH-65, the NHAI would need to acquire a few acres of land for taking up the project. The Jindal Consultancy will prepare a detailed project on the number of acres that need to be acquired, the number of underpasses that need to be built and others along the 31-KM road.

When the SP M Ramana Kumar had examined the Patancheru to Isnapur stretch of the NH-65 following the appeal of the industrialists to examine the traffic congestion a few days ago, the NH officials informed the industrialists and Sangareddy Police that there would be a permanent solution to the issue soon. An industrialist from Pashamylaram Industrial Area P Chandu Kumar has welcomed the decision of the NHAI. Saying that they were finding it difficult to travel on this stretch, particularly during the peak hours, Chandu Kumar has said that the move will certainly ease the traffic congestion. He further said that the proposed 12-lane road will save time and fuel for vehicle users. While the DPR is expected to be completed in six months, the NHAI will initiate the process of finalising the tenders then after.

Ready to meet the technological demand with crawler loaders