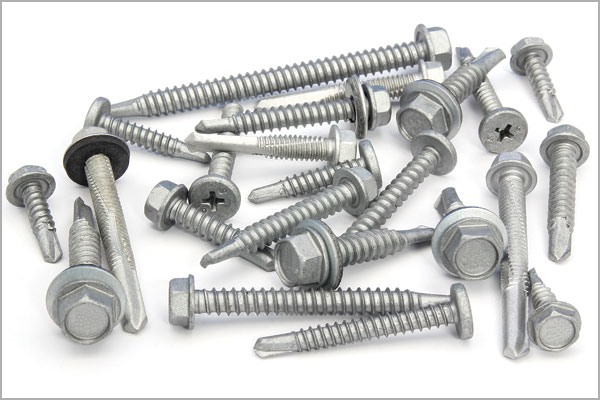 “Rust” is the common name for what happens when iron, oxygen and moisture get together. It’s a relentless chemical process that attacks, Most of us know rust as a reddish-brown flaky coat on metal and think nothing more of it, however, rust is the term commonly used for the corrosion and oxidation of iron and its alloys, such as steel. Rust will eventually bring about the complete disintegration of the iron it attacks. This fact has accounted for numerous structural failures over time. It is caused when iron reacts with oxygen and water – this reaction is known as oxidizing. If a piece of iron is left long enough, with exposure to water and oxygen, it starts rusting depending on the intensity of its exposure it will rust if it is not protected in any way. Rust is very common, as iron reacts easily with oxygen.

How to prevent rust in fasteners

The first step you should take is to use insulation, coatings or paint to seal fasteners that are a different metal than the material they will be installed into. Also, be sure to install fasteners in a way that delivers constant pressure. When a load of a fastener bear is constantly changing, the constant changes can help accelerate the appearance of corrosion. Finally, be strategic about the materials you choose to use in manufacturing and construction. The flow of electricity and the rate of corrosion are greater when flowing from a smaller object to a larger area.

A common method of dealing with rusted screws and bolts implies removing them from their sockets and leaving them to soak in a hydrogen peroxide solution overnight. Hydrogen peroxide is known to dissolve accumulated rust from metal surfaces and can even break up the entire tarnish in some cases. In case you intend to use this technique, then bear in mind that you will have to scour the threads and the shank the fastener with a hard brush to make sure the rust is removed completely.

In the eventuality that the fastener is not too rusted, then you could try removing the corrosion by scrubbing it with fine grade sandpaper or a piece of steel wool.

If you notice rust just developing on a given fastener, then you can stop it from spreading to the rest of the piece by applying a fresh layer of protective coating. After you scrub the affected area and remove all signs of corrosion, you should apply coating on the spot to shield the metal from the environmental factors responsible for rust.

In case the aforementioned techniques have failed to provide the desired results, then don’t hesitate to check with the manufacturer and learn more about the recommended rust cleaners.

Choose to use fasteners that are similar in electric potential to the materials they are fastening together. This will reduce the flow of electricity, which will then reduce the rate of corrosion.

Rust Shield Coating is an epoxy-based organic polymer coating applied over electro-zinc plating. It is applied in an electrocoating process. Electrocoating provides complete coverage of all exposed surfaces and excellent film thickness uniformity. This waterborne coating eliminates the Phillips recess fill problems associated with the traditional dip spinning process. The electro-zinc base plating acts as a “Sacrificial” element, whereby in an electrochemical reaction, the zinc corrodes, and the base metal remains protected. Cathodic epoxy electrocoating has been widely used in the automotive industry for many years. ROOFIX Fasteners adapted this process to coating fasteners and it is now the benchmark for corrosion resistance in the construction fastener industry.

A STEP-BY-STEP GUIDE IN ANTI-CORROSION PROCESS

Mechanical Sacrificial Coat A proven tin/zinc alloy with a minimum ratio of 20-30% tin and balanced zinc and porosity not less than 8 with minimum 25um (micron) thickness that conforms to AS3566 Class 3 requirements.

Cathodic epoxy electrocoating has been widely used in the automotive industry for many years. Companies such as ROOFIX Fasteners adapted this process to coating fasteners and it is now the benchmark for corrosion resistance in the construction fastener industry. ROOFIX fasteners are ideal for exterior and interior applications where protection against chipping, moisture and salt spray corrosion is needed. Their product consists of a Non-conductive EPDM seal to prevent electro galvanic corrosion that causes corrosion on colored metal roofing sheets. All screws undergo a series of rigorous tests thus ensuring they not just meet the lab standards but also exceed American Standards (ASTM) and Australian Standards (AS 3566-2002 part 2). Requirement and advantages of Fire-rated Doors

Components and Types of Building Envelope