With the directions issued by the Commission for Air Quality Management (CAQM) to take action against those failing to take pollution control measures, the state pollution control board on Friday imposed a penalty of ₹ 10 lakh on the National Highways Authority of India (NHAI) and its two contractors constructing the elevated road at Sohna.

Officials from the pollution control board said its team inspected the entire Sohna road and found that the highways authority and its contractors had not taken exhaustive measures to curb air pollution, despite repeated directions from authorities and the CAQM.

Kuldip Singh, regional officer (north), Haryana State Pollution Control Board, said action is being taken against those found violating pollution control norms and neither the government agencies nor the private companies, which are executing various projects, are being spared.

‘We issued the penalty after our teams found several violations on the Sohna Road. We have closed all stone crushers in this zone, construction has been stopped and project developers have been asked to take adequate measures to curb air pollution,’ said Singh.

On Thursday, the pollution board’s night patrolling team discovered five locations, where diesel generator sets were being used and were made to turn off. ‘We imposed an environmental compensation penalty of ₹50,000 on these sites collectively,’ said Singh.

Officials from the pollution control board said following directions of the Supreme Court and the CAQM, they have intensified action against individual violators as well as companies, which are found violating pollution control norms. ‘We have decided to impose heavy penalties to send a clear message that violations will not be tolerated,’ said Singh.

On Thursday, the department imposed a penalty of ₹12.25 lakh on violators across the city. A penalty of ₹10 lakh was also imposed on NHAI and its contractor building the Dwarka Expressway. Three construction sites in Udyog Vihar and one in Sohna were also penalised for violations on Thursday, said officials. 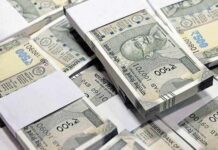 In 8 years, Rs 9,494 cr spent on railway projects in Telangana