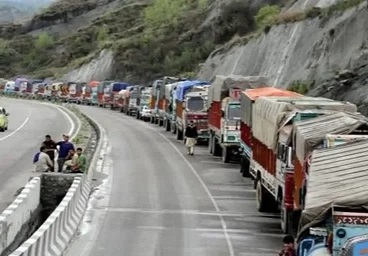 The Jammu-Srinagar National Highway was reopened on Monday after remaining closed for the past three days owing to heavy snowfall and multiple landslides in Ramban district, officials said. Senior Superintendent of Police, traffic-national highway, Shabir Ahmad Malik said the traffic from both the twin capital cities was allowed after the arterial road was cleared of fresh landslides at Panthiyal and Maroog by road clearance agencies.

The clearance of debris at certain places was still going on to ensure smooth movement of traffic, the officer told the media. The highway, the only all weather road linking Kashmir with rest of the country, was closed for traffic on Friday afternoon, shortly after it was opened after two-day closure following heavy snowfall and multiple landslides between Chanderkote and Ramsu.

Over 50 passenger vehicles were left stranded at different places by the closure of the highway. They were allowed to move towards their destinations late Sunday evening after authorities speeded up the road clearance operation with improvement in weather conditions. The officials said the traffic was allowed from Jammu to Srinagar early Monday morning, while the movement of traffic from Srinagar to Jammu was allowed only after 11 am.

The traffic was briefly halted at Nagrota in Jammu and Jakhani in Udhampur in the wake of the fresh landslides which were swiftly cleared by road clearance agencies, paving way for resumption of traffic, the officials said.They said the movement of traffic at landslide-hit areas is very slow as the road is narrow and only worthy of one-way traffic. The clearance operation is on and is likely to be completed within the next few hours, the officials said.