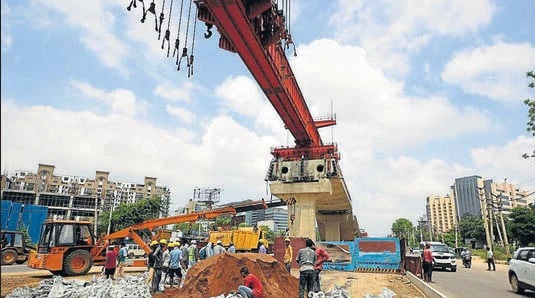 The Gurugram Metropolitan Development Authority (GMDA) is likely to start constructing a new road connecting Sector 70A to the Southern Peripheral Road (SPR) bypass from next month to reduce the volume of traffic at key junctions in the area, said officials on Sunday.

Currently, the sector has no proper road and on the demand of developers and local residents, the GMDA is building a new 2.3-kilometre road, which will connect the area to Palra Road and thereafter towards the SPR bypass, said the officials.

“There was a regular demand by residents and developers for the development of this road. Accordingly, the matter was taken up with the Haryana Shehri Vikas Pradhikaran (HSVP) for the transfer of acquired land. The estimate was accordingly approved for approximately 800square metre land, which has been transferred from the HSVP for this purpose. We are aiming to finalise a contractor by the end of this month and start on-ground construction from April,” said Shaveta Sharma, executive engineer, GMDA.

Sharma further said that the process of acquiring land for the remaining 1.5 kilometres is underway.

Besides providing connectivity to residents of Sectors 69, 70, 70A and 75, officials said that the 2.3-kilometre stretch will help residents living near Tulip Chowk and Rao Kaher Singh Chowk to avoid the heavily congested Southern Peripheral Road (SPR) and Kherki Daula toll, and head directly towards Manesar.

“With the establishment of the 2.3-kilometre stretch, the congestion on roads such as SPR will reduce significantly. This will also have an effect on lowering the volume of traffic at key junctions such as Vatika Chowk. Such arterial routes are vital in bringing about positive changes in traffic management on major road networks,” Sharma added.

According to the GMDA officials, the cost of the project is estimated to be around ₹5.94 crore, which also includes construction of drains and installation of basic road safety equipment such as road-stud reflectors, cat eyes and median markers among others. Tenders for this project was floated on Friday and bids for the same will open on March 21.

The 2.3-kilometre stretch starts from the point where traffic coming from SPR and those heading from Rao Kaher Singh Chowk converge on one side and stretches all the way till Palra Road on the other end.

“We had been approaching the GMDA since 2020 for the construction of this stretch. This stretch will not only provide connectivity to various townships, but also allow us to head directly towards Manesar and save around 20 minutes of travelling time and six kilometres of extra driving,” said Sudhir Kumar, a resident of Sector 70A.

NHAI set to Guinness Record With Longest Highway Between Amravati-Akola