Natural resources are depleting worldwide, while at the same time the generated wastes from the industries are increasing substantially. The building material industry is finding innovative methods for using construction waste and researchers have tried to produce new construction materials incorporating innovative techniques. Wastes are being used to compensate for the lack of natural resources. One such waste is plastic. Americans, like other countries, are facing the plastic wastage crisis. They generate around 42 million tonnes of it but only a minor amount gets recycled. It is because of the lack of good recycling infrastructure and coherent federal strategy. They can’t keep up with the emerging plastic production and some plastics simply can’t be recycled. Los Angeles-based startup ByFusion aims to address this issue.

ByFusion, a startup from Los Angeles is manufacturing Blockers machines using a combination of steam and compression that can squeeze a large amount of plastic into standard building blocks called ByBlocks.The machine can shape all kinds of plastics, even nonrecyclables, into standard building blocks. These blocks are used to build anything from fences and retaining walls to public terraces etc.

“The system works with virtually any kind of plastic, including fishnets, but excluding Styrofoam. And because the plastic isn’t melted but fused, it doesn’t require an ounce of adhesive, glue, or mortar. As a result, the process yields no waste whatsoever: 22 pounds of plastic makes a 22-pound block. “You literally eat your lunch, throw it in, make a block, then stick it in the wall,” says Heidi Kujawa, founder of ByFusion.

ByFusion has already partnered with a host of cities, including Boise, Idaho, and Tucson, Arizona. In Lihue, on the Hawaiian island of Kauai, the company worked with an elementary school to build a pavilion with blocks made from locally collected marine debris and fishing nets.

In 2019, ByFusion partnered with the Hefty EnergyBag program and the city of Boise, which asked its residents to separate their hard-to-recycle plastics. Only 20% of residents obliged. Even the small amount collected generated about 30 tons of plastic grocery bags, bubble wrap, and fast-food containers.

These wastes were turned into building blocks, some of which were used in a local park.For this particular project, the plastic was processed at ByFusion’s facility in L.A.

The company wants to partner with materials-recovery facilities, municipalities, and even corporations across the country that would run the Blockers themselves. “Our primary goal is to get a Blocker in every city, to enable every city to capture their own recyclable waste,” Kujawa says.

ByFusion has recycled over 100 tons of plastic, with the lofty goal of scaling to 100 million tons by 2030. At the moment, there’s only one full production unit in L.A., which can process 450 tons of plastic a year, but the startup has partnered with Tucson and Boise, and plans to expand to the rest of the country.

The company aims to place Blocker machines in every city in the US, where they can be integrated with existing municipal waste processing facilities or even run by corporations that want to process their waste on-site. “If we get 9,000 Blocker systems installed around the world by 2025,” Kujawa says, “together we can hit our 100-million-ton goal.” 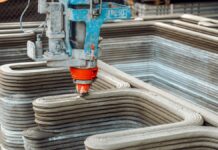 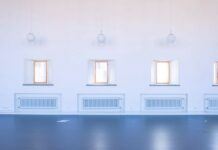 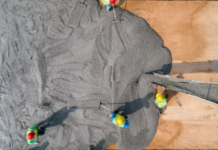